When the 9n Fords appeared in the late thirties they were perhaps one of the most important technological developments in America. This little tractor increased a man's productivity on the farm. More modern tractors are available now, but they cost much more, and are really only a refinement of Henry Ford's and Harry Ferguson's solid idea. What set it apart from it's rivals of the time was a simple hydraulic system that makes all sorts of attachments practical: posthole diggers, cement mixers, mowers, blades, scoops, chippers, plows, rakes, etc. The engine is basically a Model A Ford, 20 hp or so. All the Ford "N Series" tractors should be in antique shows because of its age, many are, but most are still in use today. Parts are readily available at this time. Go find one of the old Ford Tractors and give it a home and when you need parts don't forget about Just8N's.

The 9N:
The first Ford 9N tractor was built in 1939. It used the company's own four-cylinder engine, which carried a 3-3/16 x 3-3/4-inch bore and stroke. The unique feature of the 9N tractor was the fact that it was equipped with a unique three-point-hitch system. The Ferguson System consisted of a combined linkage and hydraulic control, applicable to a wide variety of implements and was perfected in 1935 after 17 years of engineering development by Harry Ferguson. It was developed as a all-purpose tractor for the small farm. The 9N went through changes almost every year of production.

The 2N:
Some of the newest features on the Ford 2N tractor made from 1942 to 1947 was a pressurized radiator with a shroud, and eventually sealed-beam headlights. Due to the war effort all rubber products were rationed so only steel wheels were available, and a magneto system was used rather than a battery. Other changes were made due to the war and afterwards were changed back. 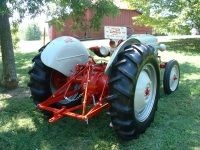 The 8N:
The Ford 2N evolved into the Ford 8N, which officially started it's production in 1947 and was made through 1952. Equipped with the Ferguson System three-point hitch and 4-speed transmission, the Ford 8N model was destined to become the top-selling individual tractor of all time in North America. The most noticeable differences between the 8N Ford tractor and 2N and 9N other then the new two color paint job was the inclusion of a 4-speed transmission instead of a 3-speed in the 2N and 9N, and an increase in both power take off (PTO) and drawbar horsepower.Some other noticeable differences from the 9N/2N was the change in lugs from six to eight in the rear wheels, the scripted "Ford" logo on the fenders and sides of the hood this scripting did not actually start until late 1950 and the absence of the "Ferguson System" patch which was no longer displayed under the Ford oval even though the tractor still used Fergusons three-point hitch. After the death of Henry Ford, Henry Ford II took a close look at Ford's tractor operation and concluded that Ford Motor Company was losing money on every 9N and 2N Series Ford Tractor it had ever manufactured under the "handshake agreement" with Ferguson. So after six years of 9N and 2N tractor production Ford ended the "handshake agreement". It left Ford with a tractor, but no implements, while Ferguson had the implements, but no tractor, although Ferguson had already begun tractor production in England with Fords tractor design and all of Fords blueprints and specs. 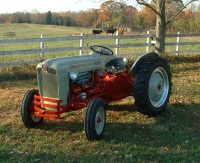 The NAA:
On April 9, 1952, Harry Ferguson accepted a settlement agreement with Ford. Dearborn Motors reimbursed Ferguson $9.25 million for patent infringements. Ford agreed to discontinue production of the hydraulic system using Ferguson's reservoir-side hydraulic pump by the end of the 1952 model year. In 1953 & 54 Ford came out with the NAA model tractor. 1953 was the 50th anniversary for Ford and they called this tractor the Golden Jubilee in honor of Henry II. The tractor was given a new look and a new 134CID engine with overhead valves replacing the flat head Model A engine. Many modifications and improvements were made throughout the production of the N-series tractors.
-
The U.S. "Hundred" Series: 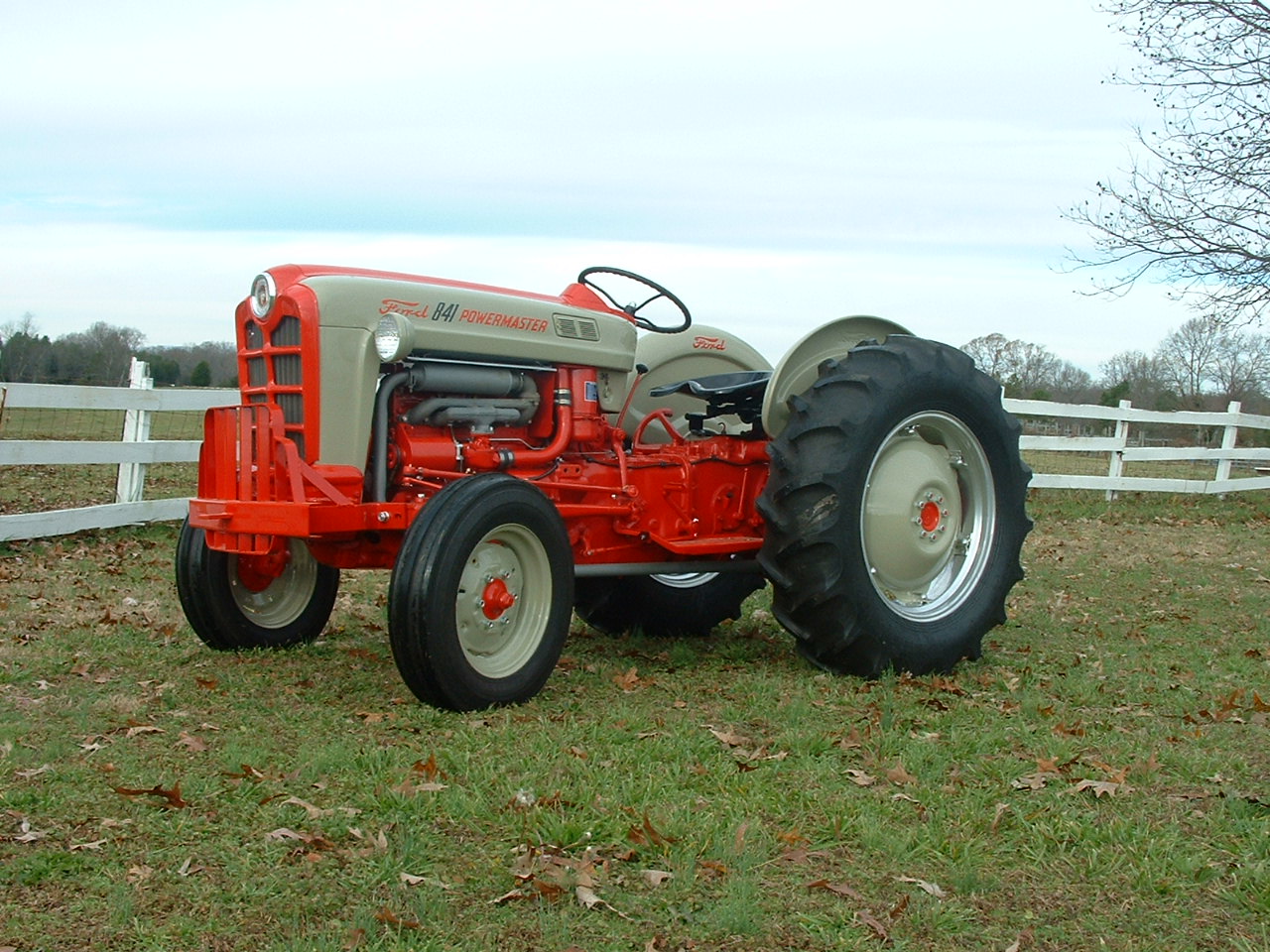 The "1" Series:
From 1957-62, Ford brought out a series where all the model numbers ended in a "1." The first numeral â€“ the 'hundreds' place â€“ indicated the relative power and configuration. The second numeral indicated the transmission, hitch and PTO options. The "501," "601" and "701" series all had the same 27-29 HP engine. But the "501" series were offset, high clearance tractors, the "601" series were utility configurations, and the "701" series were row crop tractors. So, if a farmer wanted a row crop tractor with around 30 HP, he chose the "701" series and then chose from the "second numeral" options. For example, the "721" had a four-speed transmission but no PTO or three-point hitch. The "741" had all three. The option choices increased as the numbers went up. So, the "781" had a "Select-O-Speed" transmission, two-speed PTO and three-point hitch. The "801" and "901" series had the same options available and boasted between 35 and 40 HP depending on fuel type. 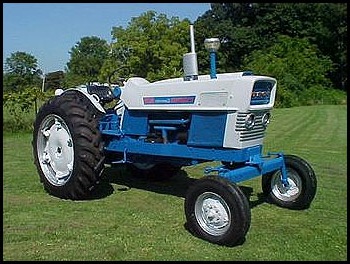 The "Thousand" Series:
In 1961, Ford brought out a new, higher-powered series of tractors that would see them through to the end of the decade. The first was the high powered, 60HP Model "6000." But the design hadn't had enough testing and developed engine and transmission problems. Ford retooled the design and reintroduced the tractor with a whole new paint scheme. Gone was the red and white paint and in its place was the new trademark blue and white. In 1962, the line was expanded to include the Model "2000" (based on the British Dexta) with 32 HP, and the Model "5000" (based on the British Super Major) with 40 HP. The "4000" was introduced in 1963 with 42 HP.

Whether you are restoring your tractor back to its original form or working it on the farm Just8N's can give you the expert advice along with fast and friendly service. We pride ourselves in having the lowest prices in the business while offering the best quality parts available. Order Online or call us at 888-355-9937 for all your Ford tractor needs.